Workplace Happiness is More Powerful Than You Realise

With disruption and change all around us, studies clearly show that a manager’s behaviour has a huge influence on happiness at work. Good leaders motivate and energise their employees, creating a level of happiness that makes employees go the extra mile for their business and their customers. Bad managers spread frustration and stress.

Alexander Kjerulf is one of the world’s leading experts on happiness at work. During his session at at HR Innovation & Tech Fest he’ll share some tried and tested strategies to help leaders make their people happy at work. Spoiler alert: it doesn’t take much. Happiness at work is not about raises, bonuses, perks and promotions – it comes from simple, effective actions that any leader ought to know and do.

“Studies show that happiness at work may be the most important success factor for a modern workplace. Happy workplaces are more effective, less stressful and have lower absenteeism and employee turnover,” Alexander says.

How to Lead with Happiness

In this video, Alexander talks about the strategy behind leading with happiness – Why is it important? Who is it for? And how do you become a happy leader? 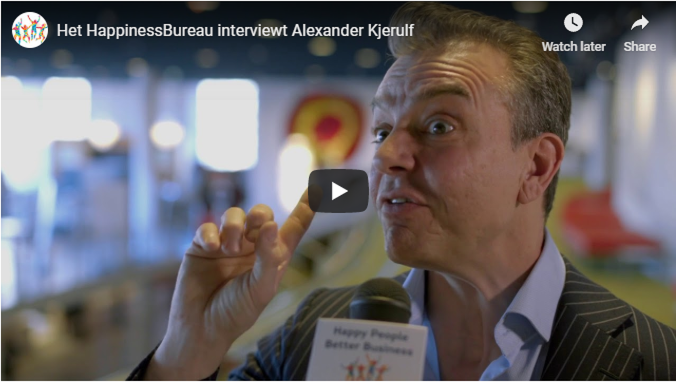 “What we know from our happiness research is that there are so many simple, fast, easy things you can do that have a provable, measurable effect on people’s happiness. It’s just about going out and doing them,” Alexander says.

Happiness is a Science

In his article The 5 Most Important Findings From The Science Of Happiness That Apply At Work, Alexander outlines how the science behind happiness has a profound impact on our working lives.

“Traditional psychology looks at everything that can go wrong with our minds – psychosis, neurosis, phobias, depression etc – and asks how it can be treated/cured. It’s an incredibly important field but positive psychology asks the opposite question: When are we happy? What does it take for people to live good lives and thrive psychologically? The field has been especially active for the last 30 years and we are learning some really interesting and surprising things about happiness.”

Here are five findings from positive psychology that Alexander believes are the most relevant in the workplace.

In a University of Warwick study to test the effect of emotions on productivity, participants were either shown a comedy movie clip or treated to free chocolate, drinks and fruit. Others were questioned about recent family tragedies, such as bereavements, to assess whether lower levels of happiness were later associated with lower levels of productivity. They found happiness made people around 12% more productive.

So happy people not only feel better and thrive more, they also do better work.

Many social experiments have found that how people around you feel rubs off on you and vice versa. One study in emotional contagion at work brought test subjects together for a simulated negotiation. They didn’t know that one member of the group was an actor extensively trained by the researchers to exhibit certain emotions during the meeting. Would the emotions of one person affect the rest of the group? The answer is yes – and when the emotions transmitted by the actor were positive, the whole group became more effective.

3. Small actions can have a large effect on our happiness

You may think that in order to become happier in life, you have to win the lottery or achieve massive amounts of success. But studies like this have consistently found that simple interventions (such as writing a thank you note or making a list of 3 good things that happened to you this week) are surprisingly effective in boosting happiness.

This is interesting in the context of happiness at work because many of the things companies do to make their employees happier are utterly predictable: Summer parties, Christmas parties, Bonuses, team events, and so on happen on an almost completely fixed schedule, which serves to diminish their effectiveness. Studies like this from Baylor College of Medicine found our brain finds unexpected pleasure more rewarding that expected ones.

This is why Alexander advocates performing random acts of workplace kindness (see next point).

5. Making others happy, makes us happy

It’s been consistently shown that doing things to make yourself happier has a small effect on your happiness but doing things for others, elevates their happiness AND yours much more. So one of the most reliable paths to happiness at work is to focus less on your own happiness and more on making others – be it co-workers or customers – happier.

Read more about the science behind happiness in this fascinating article.

Alexander Kjerulf is the Founder and Chief Happiness Officer of Woohoo inc and one of the world’s leading experts on happiness at work. He is the author of international bestseller Happy Hour is 9 to 5 and has consulted to some of the world’s best brands including Microsoft, LEGO, IKEA, Shell, HP and IBM.